It seems like every time an officer murders an innocent and unarmed black person, on queue, the news outlets begin parading images of cops in attempts to, based on the consistent pattern of them running these stories, paint the police in a good light.  Typically, they run a story about a white cop who went to whichever black neighborhood and did something “nice” to or acted cordial with some black people.

An example of that would be this photo which media outlets began circulating after Amber Guyger was found guilty of murdering Botham Jean in home.

This sickens me because I know what these types of images are designed to do.  As you can see the caption by the white man in the Facebook post I embedded, it accomplished just that.  These images are propaganda, and one of the objectives of it is to the condition the white public into having blind and unwavering support for the police, even when they’re openly and unconstitutionally executing their fellow citizens in the street and in their own homes.

Images like this send a message to the white masses that “This isn’t a race thing because look at those good white cops being friendly to those black people.” Yeah, nevermind Sandra Bland, Philando Castile, Walter Scott, Eric Garner, Tamir Rice and all the other black bodies you could stack to the moon and back at the hands of “law enforcement.”

They send the messages to white people “It’s just a few bad apples giving all cops a bad name.” Well, the thing about that is, why are none of these police officers in municipalities around the country not coming together to do something about these “bad apples” who are murdering innocent black people?  If they’re not all bad apples and if their job is to protect and serve, you’d think there’d be a collective outrage amongst the men and women in blue, in response to these bad cops sullying and dishonoring the honor of the badge they themselves wear.

These tactics the media uses also, unfortunately, condition black people to become accepting and even forgiving of the systematic harm done to us by every level of law enforcement.  Botham Jean’s father, after the killer of his son was found guilty of murder said at a church service to his congregation “I would possibly like to be friends with her one day.” In addition, the brother of Botham, looking the killer of his brother right in the eye, said he didn’t believe that she should be punished and then proceeded to wrap his arms around her in the middle of the courtroom.

The media, of course, took this and ran with it.  Scores of people at my job and people in my own family were harping about how brave his brother was and how powerful it was that he made this public display of forgiveness.  These images sent the message to black people, no matter how poorly you being treated, do not act.  Do not get involved in your local politics.  Do not demand justice.  Do not fight back.  Just pray about, forgive the very people who are murdering our men, women, and children, and go back to business as usual.

Let me clarify something while I am on this point.  At no point in the Bible does it say you have to make public displays of forgiveness and nowhere does it say you have to reconcile with whoever has done wrong against you.  What does the Bible talk about?: defending the weak, speaking out against and denouncing demonic manifestations in the world, protecting yourself and those you love and who love you, standing up against evil, liberation, and being brave in the face of injustice.

Too many black people cherry-pick a couple of lines about forgiveness out of the bible and just pray a few times versus actually committing to work it will take to end white supremacy, because, in reality, they’re scared.  But, most of all, they’re flat out lazy and can’t wait to get back to watching Real Housewives of “whatever” and getting turnt up at the club.

When we make these public displays of forgiveness and when we don’t demand uncompromising and stone cold justice for these Satanic and ritualistic acts being committed against black people, we embolden the next white supremacists to kill the next 12-year-old Tamir Rice or the next pregnant Pamela Turner.  Punishment is supposed to act as a deterrent for crime, and we as black people need to send the message, if you harm black people, there are going to extremely harsh punishments, such as life in prison without the chance of parole.

Too many of us fall for the propaganda and we don’t want to believe that white supremacy running rampant in these law enforcement agencies is as bad all that. 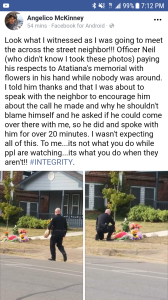 And, the media knows this about us.  So, expect to see images like this floating around in the news cycle pretty soon here, and, just like you’ll see in the comment section of this embedded post (the post has since been deleted so I only have the screenshot), expect too many of us take the bait.

Black people, understand, you are in mortal danger 24/7, and, as is the case with Tatiana Jefferson and Botham Jean, just because you’re not looking for a fight, white supremacy will end up on your doorstep looking for you.

Sharing posts like these and making public displays of forgiveness is severely off-code, and inspires the next white supremacist to murder one of us because they figure, “If black people are fine with and even trying to befriend the very people killing them and I’m probably going to get off easy for doing, well, why don’t I go ahead and be the next Amber Guyger or Aaron Dean.”

The name a go by is my pen name, The Stormy Poet – https://bit.ly/2Tyq6xu (feel free to click the hyperlink to learn more about who I am). Thank you for taking the time to my official website.

If you would like to support this cause and continue to see it grow, become an official supporter of this message by making a one-time or a monthly monetary contribution to The Stormy Poet Compositions. Your contribution, no matter the amount, makes all the difference. One-Time Contribution: https://www.paypal.com/paypalme/thestormypoet, Cash App $thestormypoet, (for the price of a cup of coffee or a drink at the bar), $5 Dollar a Month Contribution (Free E-Book #PoethnicJustice perk): https://www.patreon.com/TheStormyPoet