Due to my faith, I don’t believe in the death penalty.  I do, however, believe in rehabilitation, but I understand the society we live in isn’t one conducive of producing the type of effective rehabilitation an anti-black bigot needs.  Therefore, I believe if one takes a life intentionally, especially if you do so under the inspiration of racism, you deserve to be in prison for the rest of your time here on this planet.

In other words, let the punishment fit the crime.  You took a life, so you have to give up your life of the freedom of interacting with the general society.  crime.

The Amber Guyger murder trial has transitioned into the sentencing phase after she was found guilty of first-degree murder.  And, during this phase, the prosecutors cross-examined Amber Guygers’s character and shed light on some very telling evidence for the jury to see spelling out who she really was at heart.

They were able to collect Amber’s phone records, and what they found were a number of racist and hateful conversations she had engaged in with her cop peers. 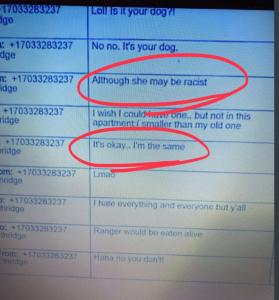 Along with this damning evidence, they exposed Amber’s Pinterest account and uncovered several aggressive posts about committing acts of violence to citizens and ones taking indirect shots at the integrity of black people.

What the prosecutors did not include, though, and what individuals who constantly study and challenge white supremacy, such as myself, had discovered back when Botham Seam was initially murdered, was a very peculiar picture of Amber Guyger.  In this photo, she is posing next to what appears to be a family member who is throwing up the white power hand signal.

Many people who use this signal try to deny “white power” is what it stands for, and some say claiming it to be so is just an opinion.  However, the Anti-Defamation League has officially declared it to be a hate symbol, just so you know I’m not basing that claim off any bias.

It has been made perfectly clear she had anti-black racist views, and, therefore, it is fair to assume race does factor into why she forced her way into Botham Sean’s apartment and shot him in cold blood.  The People don’t need this proven in a court of law.  Anyone can look at the clear evidence and, based on common sense, and arrive come to that conclusion.

Yahoo News put out a piece explaining how the guilty verdict was “a victory for black people.” Nothing could be farther from the truth.  We live in a society governed by the rules of racism/white supremacy, and one of the freedoms coupled with white privilege (which white supremacy generates) is the ability for white people to harm black people with little or no punishment.

What a “W” would look like in this instance is if that wicked freedom was ripped away from her, someone classified as white, permanently.  Life in prison for a cop who unconstitutionally executes an unarmed black person would send a message to the DPD and to the rest of the country, there will be severe punishment for doing so.  A life sentence would represent a direct undermining factor to white privilege’s granted right to take life at a whim.

Roy Oliver intentionally shot a 15-year-old black boy for fleeing him, and he only received 15 years for doing so.  That was not justice for Jordan Edwards, his family, nor black people.  The punishment should fit the crime, and, since Roy Oliver took a life, his life of freedom to dwell among civilized society should be taken away.  And, the same principle should apply to Amber Guyger.

We don’t need cops to have better training.  They’re are trained properly on how to not kill civilians if it is possible in any given situation.  We, as black people, need and should require justice in the form of PUNISHMENT, and nothing else should suffice.

The name a go by is my pen name, The Stormy Poet – https://bit.ly/2Tyq6xu (feel free to click the hyperlink to learn more about who I am). Thank you for taking the time to my official website.

If you would like to support this cause and continue to see it grow, become an official supporter of this message by making a one-time or a monthly monetary contribution to The Stormy Poet Compositions. Your contribution, no matter the amount, makes all the difference. One-Time Contribution: https://www.paypal.com/paypalme/thestormypoet, Cash App $thestormypoet, (for the price of a cup of coffee or a drink at the bar), $5 Dollar a Month Contribution (Free E-Book #PoethnicJustice perk): https://www.patreon.com/TheStormyPoet