Harris made a run for the presidency herself in the #2020Election year, but failed miserably to gain any traction and was one of the first candidates to withdraw from the race due to low support.  Her own state of California didn’t even back her in the primaries.

Harris ran on the platform of being a black woman and that she identified with this issues black women face who live in American society.

That being said, this needs to be stated in no uncertain terms: Kamala Harris DOES NOT self-identify as black, and she has utter disdain for black women and black people in general.

Harris, before making her bid for the presidency, did not identify as black like she does now; she identified as Indian (Asian).  She very plainly let it be known her Indian mother was the primary influencer of her views and ideology, not her Jamaican father–her only acclaim to any sort of blackness.  Harris’ mother’s lineage is of the Brahmin class in India–a class at the tippy top of the caste system hierarchy in India and who is notorious for their collective anti-black beliefs. 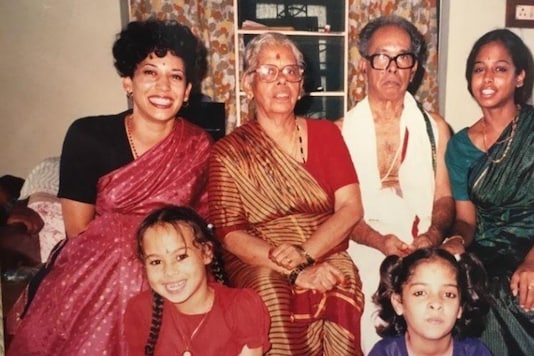 Black women whose lineage can be traced back to Amercian slavery are members of the designated bottom caste here in America known as “blackness.” Black women native to America have no shared experience with Kamala Harris, in regards to being a part of a top caste lineage.

She had an Indian upbringing, not one of a black person whose lineage goes back to slavery in this country.

The thing about American black women who are the Bloodline Successors of American Slavery is that they don’t have the option of switching ethnicities whenever it suits them.  Kamala switches from “a black woman, to a “woman of color,” to “Indian, and to “Asian” depending on whatever crowd she is attempting to cater to, which is extremely disrespectful to American black women.

Black women don’t have the option of switching their ethnicities when being targeted by the system of racism, economically, psychologically, and physically.

Indian/Asian women aren’t  systematically being gentrified out of their own neighborhoods across America.

Brahmin women aren’t being aren’t being targeted to be starved of the basic resources they need to live a decent life here in America.

Indian/Asian women aren’t being murdered in their own homes while playing video games with their nephew or while sleeping naked in their own beds here in America nor are their men being charged for crime for the protecting them from such harm.

It is black women, like Sandra Bland, who mysteriously end up dead in jail cells that have cameras installed but just couldn’t seem to capture the footage of her allegedly committing suicide.  Another black person allegedly committed suicide in the same cell after her where there was no footage at all, too, by the way.

It is black women like Felicia Russell who have to deal with being harrassed by white supremacist citizens while pregnant simply for being in a Wal-Mart parking lot, where a black man, a group Kamala Harris never acknowledges as an oppressed group, had to step in and defend her.

Black women have to worry about being shot while pregnant by police officers, like Pamela Shantay Turner, even when they’re clearly explaining they’re innocent of the crimes they’re being accused of.

Black women, like Atatiana Jefferson and Breonna Taylor, have to deal with the fact they could be murdered in their own homes for no reason at all other than they were minding their own bushiness, not Indian/Asian women.

Black women have to worry about their sons, fathers, brothers, uncles, and nephews being randomly murdered by white supremacists with impunity.  They have to live with the fact the killers of their loved ones won’t be met with severe punishment–the only just punishment–in the form of life in prison or the death penalty.

American black women as a collective don’t have the economic benefit of generational wealth via a caste system like Kamala Harris does.  Black people in America have been physically targeted for violence any time they build up an economy, which is the driver of generational wealth.  Kamala Harris and her family have never been targeted in such a way and has never had to overcome the leaps and bounds black women have despite these barriers.

Kamala Harris does not identify as a black woman, nor has she proposed or championed any policies or legislation to correct the damage done by to black people at the hands of the U.S. government, which includes black women.  She’s merely using the “black girls rock,” “black girl magic,” “you go girl,” “black women are the backbone of the Democratic pary” narrative to disrupt black men and women from having any kind of cohesive political agenda.

Kamala Harris, during her stint as a DA and as the attorney general of California, does, indeed, have a track record of locking up black women, though.

Bottom line, if Kamala is a black woman, what goes does that fact do.  The real question is, what has she produced that’s benefited black women as a collective, and what specific tangibles is she pledging to black women to address and correct the oppression systematic white supremacy has inflicted upon them?

The name a go by is my pen name, The Stormy Poet – https://bit.ly/2O1Ar0O (feel free to click the hyperlink to learn more about who I am). Thank you for taking the time to my official website.

If you would like to support this cause and continue to see it grow, become an official supporter of this message by making a one-time or a monthly monetary contribution to The Stormy Poet Compositions. Your contribution, no matter the amount, makes all the difference. One-Time Contribution: https://www.paypal.me/thestormypoet), Cash App $thestormypoet, $5 Dollar a Month Contribution (Free E-Book perk): https://www.patreon.com/TheStormyPoet